While the pandemic brought fear, anger, despair, and grief to the world, it also drastically changed how we work. As soon as lockdowns happened worldwide, entire industries switched to remote collaboration without too much trouble, keeping the global economy afloat after the initial shock was over.

For many, working from home became the new normal. Meetings and events moved from the physical world into the digital world. Suddenly, employees had to be onboarded via Zoom or Teams, investments had to be made without ever seeing founders in person, and Annual General Meetings moved to the digital realm. While for many millennials and baby boomers, this was a brand new experience, it had been common practice for Gen Z and Gen Alpha. For years, these generations have grown up in the digital world. They have been socialising, interacting, trading, playing, partying, flirting, working, experimenting, presenting and collaborating in closed virtual worlds such as Roblox, Minecraft or Fortnite. In the coming years, these generations are hitting the workforce, especially Gen Z, and they are expecting a different way of working. Most definitely, they will not accept a 9-5 job in a cubicle.

As the metaverse kicks into gear, remote working technologies will become more advanced and intuitive, making collaboration, and socialising with friends and family across the digital highway a lot more comfortable than using the current versions of Zoom or Teams. Work from anywhere will replace work from home. First for knowledge workers who have already become accustomed to this new paradigm but later also for operational staff as digital twins and virtual and augmented reality tools become advanced enough to seamlessly operate an oil rig from the comfort of your tropical island. Of course, before we can settle in on that comfy beach chair watching the sunset while doing your work, organisations must change their mindset and cultures, drop the work from here mode, and embrace the enterprise metaverse.

Technically, the term enterprise metaverse is not the right term. After all, there is only one metaverse. For lack of a better word, I opt to use this term to indicate the difference between the metaverse used by consumers for fun, play, shopping and entertainment versus the metaverse used by organisations to enable work and collaboration across time and space.

While all the entertainment in the metaverse will fuel our endorphins and drive our dopamine through the roof even more than social media does, for better or worse, the enterprise version can actually make work more fun and especially more efficient.

In fact, from an enterprise perspective, we are already living in version 0.1 of the metaverse, with Zooms and Teams sort of merging the physical and digital worlds and collaborative tools such as Slack or Miro enabling digital collaboration. However, these are mere windows into each other’s reality and not a complete convergence of the physical and digital worlds. Neither do they provide an immersive experience, though both Zoom and Microsoft have announced immersive virtual experiences. When it comes to most of the available tools today, they are kind of flat and not really immersive.

With organisations required to embrace the metaverse as it comes online, the augmented employee will become the norm. This employee benefits from various technologies, including immersive technologies such as VR or AR and, more importantly, artificial intelligence, robotics or digital twins. An augmented workforce is a blend of human workers and technology seamlessly collaborating for a better outcome.

The First Law Enforcement Exercise in the Metaverse 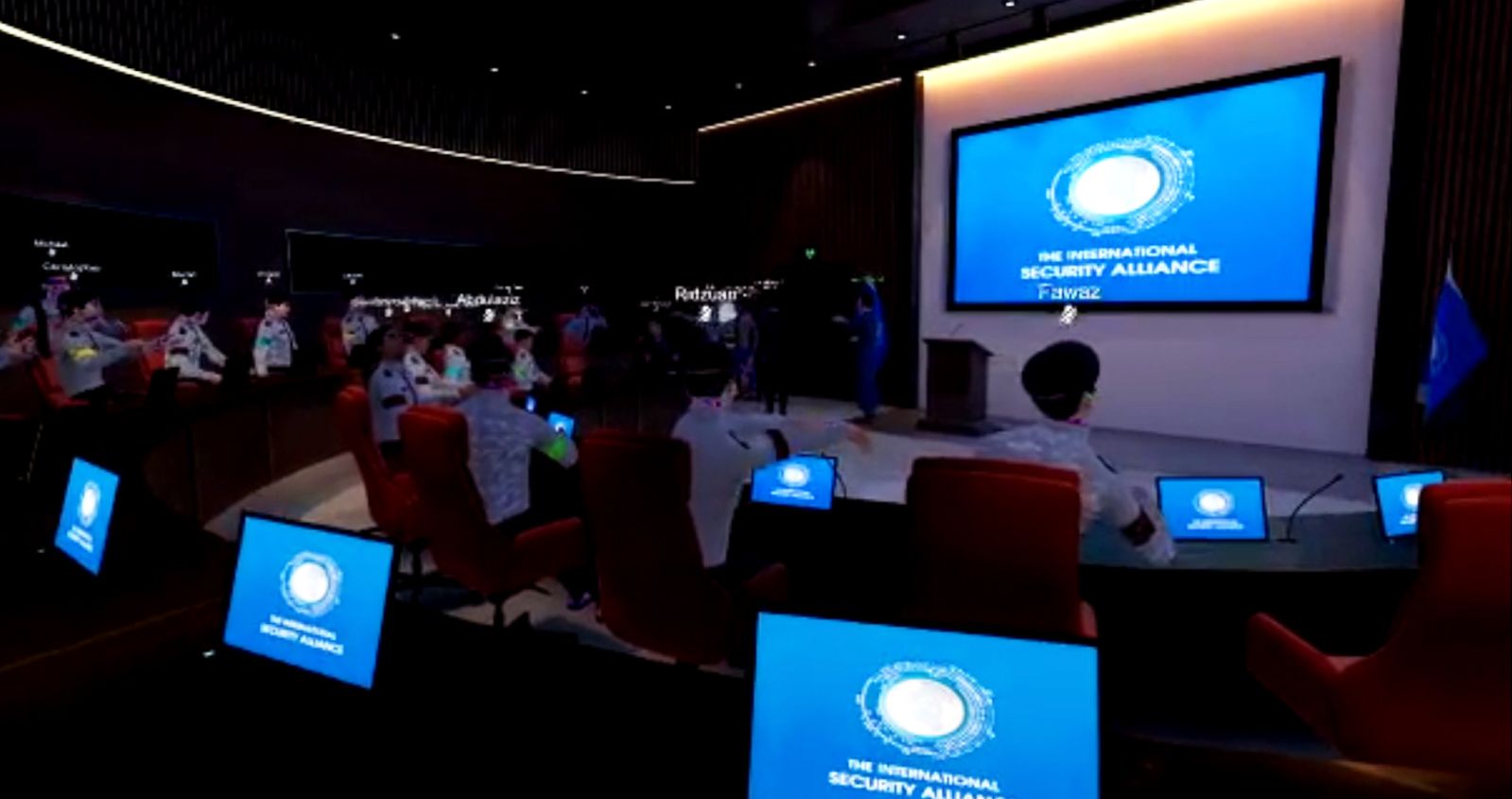 The Alliance’s mission is to jointly confront organised and transnational crimes and to combat violent extremism and radicalisation in all its forms to counter threats to global peace and security. The organisation organises international exercises to become better at fighting terrorism in an international setting, called ISALEX. From March 23-25, the Dubai World Expo 2020 hosted the ISALEX 2.0, and with the UAE known for being at the forefront of innovation, they organised the event in the metaverse.

According to Major Hamad Khatir, Director of the International Operations Department at the Ministry of Interior of the United Arab Emirates, who originally conceived the idea of doing the exercise in the metaverse, the UAE chose the metaverse as it enables the design of tailor-made but real-life scenarios that teams experience in their unique and exacting roles, allowing them to engage and experience many different environments and situations with varied outcomes without any of the risks.

A Unique Virtual Collaboration Across Borders

Before the event could occur, the organising committee dispatched VR headsets to all participating countries and trained the participants on how to use them. These logistics appeared to be more challenging than initially expected.

The event took place at the Engage VR platform, and I was invited as an observer to experience how dispersed law enforcement teams from across the globe worked as one team in the virtual world with physical evidence to solve the security issues presented. With different groups working on various aspects of the multi-faceted challenge, collaboration and sharing information were crucial for completing the exercise.

The event took place in the fictional country of Brinia, where over the course of three days, several terrorist attacks took place. It started with a drone attack on the local airport, then the hacking of traffic lights in the city and finished with the threat of a full-scale attack during a sporting event. There were witnesses to be interviewed and the Brinia social media channel to follow (for which they used the decentralised Mastodon (a free and open-source social media tool).

Doing such an international exercise in the metaverse has proven to be a major success. As Major Hamad Khatir explained, the dynamics in virtual reality were much better than on Zoom. Moreover, acting in VR removed any of the barriers and hierarchy as the participants’ avatars were all donned in standard uniforms, without any ranks shown. This informal environment helped break the ice faster and resulted in a successful collaboration, despite the challenge taking place across cultures and involving team members from various ranks. 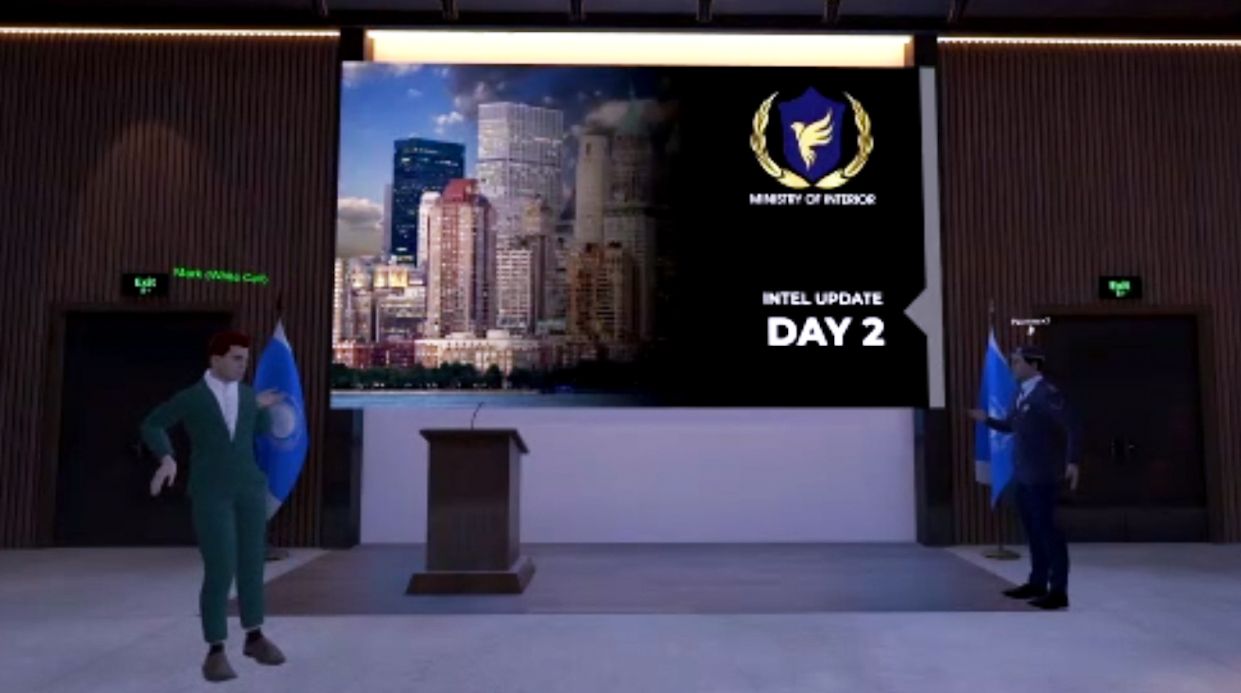 Every day, the teams were briefed in VR, and the exercise combined the use of the Engage platform as well as Zoom to communicate and discuss the findings. Law enforcers met at the scene of the drone attack, the accidents on the street due to the hacking of the traffic lights and interviewed a taxi driver who had transported the terrorist. These simulated environments offered a unique perspective to the exercise, making it a lot more realistic and enabling the dispersed teams to have a shared experience.

The Future of International Collaboration is Immersive

While the metaverse is very much still under construction, initiatives such as ISALEX 2.0 show the potential that immersive technologies have for international organisations to collaborate and deeply connect, regardless of where people reside.

According to a 2018 Capgemini report, 8 out of 10 companies implementing AR/VR have indicated that the operational benefits of using these technologies exceed their expectations. Early adopters of these technologies showed, on average, a 57% increase in efficiency, a 55% increase in safety, a 52% productivity increase and a 47% reduction in complexity. This is a few years before the pandemic, and since then, the technologies have improved significantly. As ISALEX 2.0 showed, doing technical training using virtual reality brings significant benefits for all stakeholders involved.

As Major Hamad Khatir mentioned, looking a bit further into the future, the metaverse will enable law enforcement from around the world to capture crime or accident scenes immediately after they happened in volumetric data, enabling dispersed teams to have access to a scene as it was using virtual reality, long after the scene has been cleaned. This could significantly improve solving crimes or help prevent future terrorist attacks.

In the metaverse, employees and teams can be anywhere and be either digitally or physically in the same office, meeting room or conference. The future of work is immersive, and in the coming years, we will see many more immersive scenario-driven global exercises that will change how international organisations can collaborate across borders.

If you want to know more about the enterprise metaverse, you can pre-order my new book now: Step into the Metaverse: How the Immersive Internet Will Unlock a Trillion-Dollar Social Economy.